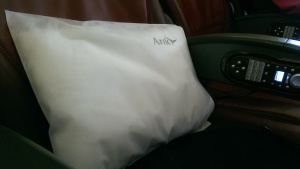 For the following post, I shan’t name any names when it comes to the airline itself (cough, cough, Arik Airlines! Cough) but lets just say, the adventure didn’t end after check in at the airport.

It wasn’t a full flight, which is always great. I set myself off, dozed off during take off, and was well on my way…or so I thought. They started by bringing around lunch and much to my surprise, this guy whose uniform looked suspiciously similar to a captain’s uniform started handing out lunches.

I’m just going to pause here and let you ponder on that. The captain of the flight is serving lunch. Discuss. (20 points) I took a picture and then pretended I didn’t see that. 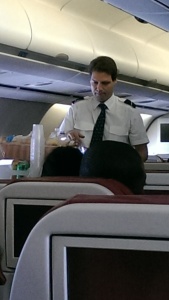 Aren’t those shoulder thingys what a captain wears? Am I right?

Anyhow, the options were chicken or beef (sorry veggie people!) I asked for chicken, which came with jolof rice. A few minutes after eating, my stomach started to bubble and instead of debating it, I popped a Pepto Bismol pill and kept it moving. The outlet under my seat stopped working (as well as all in-flight entertainment, yes that’s right, no inflight entertainment) so I moved to another seat closer to the back by the bathrooms.

So here I am, deeply engrossed in work when I notice that the cabin has a certain…odor. Throngs of people are lined up for the bathroom and now the stewards keep walking through the cabin spraying air freshener. That was about 3 hours into our 11-hour flight.

Fast forward to several hours of working, sleeping, dodging extra air freshener and the steward trying to holla in-between his spray shift, and we landed safely amidst raucous applause, loud shouts of “Yes Jesus!” and Hallelujah Jehovah!” I decided to read that as merely a super jovial group of passengers and not that our landing safely was some sort of anomaly.

The captain (now back in the cockpit apparently) announces over the PA system: “Welcome to Lagos!” 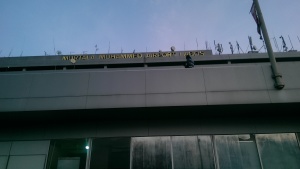