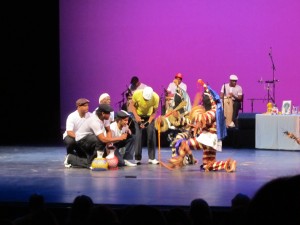 For whatever reason I never cease to be amazed by how familiar Cuban folkloric dance is. I’m fairly sure I was a Cuban musician in a past life, its the only explanation that makes sense. I mean, I know about the slaves who were brought over and preserved the music and dance and made it their own. I suppose it has to do with the entire artistic spirit of Cuba…the “making it your own” part, the seriousness and playfulness, the accessibility of it. Dance is a dialogue and takes many forms (as most good dialogue does.) How is it that religious music and expression in my upbringing was so sterile and unaccepting of form and passion? Whose great idea was it to make THAT exchange, of giving up the soul that comes with song, movement and worship in exchange for ‘civility?’ Bad move dude, whoever you were.

The world famous group Los Muñequitos de Matanzas was performing last weekend a good hour out of the city, and I dragged

poor Kakuri to come up and see them coz..well coz they’re worth it. Its always hard to watch these kind of things in “performance spaces” coz those just aren’t made up for the type of interactivity that this dance really deserves, but the crowd did their best. Some folks were singing along and knew all the words, all the men had on their kangols and white linens, they did the dances for the orishas, and then did the rumbas and guaguancos…gorgeous.

To me, Cuban folkloric is a refusal to let go of an identity, and yet the identity grows and changes with the people. That’s what I took away at least. The Si Cuba! Festival is running through June, (thank God!) so I have a few more opportunities to get my rumba on this summer. Check them out if you’re in New York, its worth it!