So the other day I had a heated debate with a chap who thought that a certain African film that I adore was “crap” because it had “no depth” and was thus “mediocre” and not worth supporting. He said he was opposed to supporting an African film just for the fact that it’s African, proclaiming “I’m not in the business of mediocrity!” 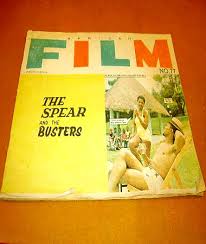 The debate eventually moved to us taking it to the streets (well, at least the BBM version of the streets!) and while I’m certain beyond doubt that dude was completely misguided on this particular film, it brought up an important question: MEDIOCRE…AS COMPARED TO WHAT? What scale are you measuring by, and if the said film (or other piece of artwork) doesn’t measure up, does that make it “crap” that should be dismissed altogether? (*for the record, the production quality of the particular film in question is quite stellar, so this chap was referring to the type of story, acting, editing, direction, etc)

Don’t get me wrong, I’m all about high quality African films: high quality scripts, productions, acting, etc so please don’t think that I’m advocating that we chuck our standards out the window for that fact that the film is African. Far from it. But are we measuring our work against that of the Western and Asian cinema greats because that is the cinema that should define what our cinema should be, or is there space for us to develop our own measuring stick for ourselves according to our own cultures and histories? And if we are measuring our cinema against someone else’s foreign cinema, must we wait until our films look/sound/feel like those before we can support or celebrate our work? What happens in the meantime?

The one thing I do know for ANY filmmaker anywhere in the world is that it takes time, practice and self-growth to make great work. Unlike a profession like accounting where one goes to school, learns how to balance books and such, then goes on to work in the field by putting their acquired counting skills to work, and either does a great job or doesn’t, film requires WAY more on-the-job practice before one can expect to be excellent. Not only do you need to have a visual eye and a way with people, and excellent communication skills, the situation changes with every scene, actor and crew member because each needs to be handled uniquely. Which means, for our relatively young industries with hardly any film schools, and the added hardship involved in getting the resources and support together to make even one film to test out one’s skills, it will probably take a while to get to the levels of Coppola, or Ang Lee or fill-in-the-blank-fabulous-director-X.

So what do we do in the meantime with all these so-called mediocre films that someone out there is struggling to make? I mean, it’s not like a mediocre film is easier or less expensive to make than a fabulous film (I’ve seen plenty of very cheap fabulous films, as well as several awful expensive ones, and not only in Africa either…can we all say Michael Mann’s Miami Vice? I rest my case. ) Do those films get relegated to the “less enlightened” masses while us “high-brow, avant-garde” people twiddle our thumbs as we wait for something fabulous to come up that we can comfortably support?

I’m not advocating for anyone to abandon their preferences on the whim here. All I’m asking is for you (yes YOU!) to think about what exactly your standards are, and why they are what they are, and what it would  take for you to back an artist who needs support, encouragement and patronage in order to gain the resources and confidence to continue working, and eventually reach your chosen standard. What can we do to support OUR artists, no matter how mediocre they might currently be, so that we can eventually have some other culture measure their films against ours as a meter for “great cinema?”

I’d love to hear your ideas!