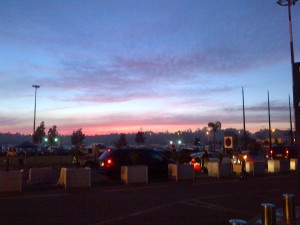 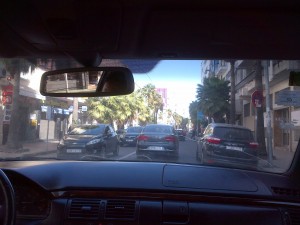 About the town in a taxi 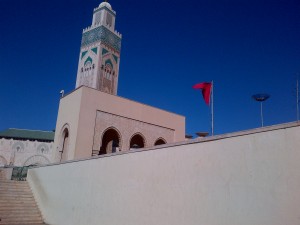 The Amazing Mosque by the sea… 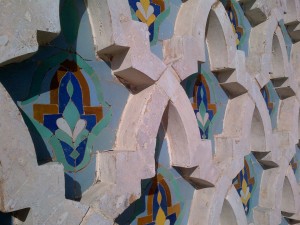 Details on the Mosque walls 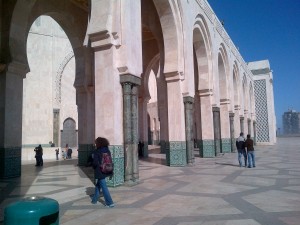 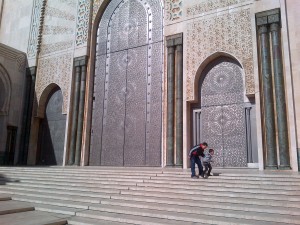 Mosque doors…remind me of Zanzibar 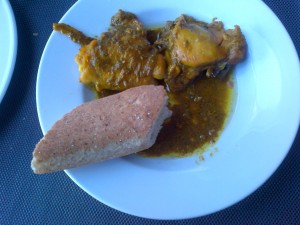 Lunch at the Airport hotel…Chicken stewed in an olive tapenade of sorts and bread. Delish! 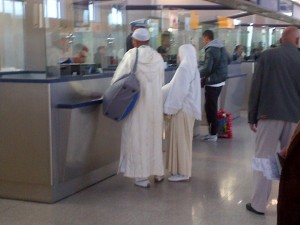 Talk about blowing my mind! What a beautiful and quaint city that was.  I had a 12 hour layover on my way to Brazzaville, so my colleague and I decided to get a cab and go see the city a little. We didn’t see very much, but it was perfect for a quick trip. A little chilly, and apparently (according to my colleague) it looks a lot like Paris. Oh and the leather jackets at the market were to die for! Definitely prepare for that if you’re ever in Morocco good people. Sadly I wasn’t prepared and I’ve been regretting it all afternoon. However I did buy some spices and Argan Oil for cooking (who knew it wasn’t just a salon product!) I love how the male and female overall coats/burkas have hoodies attached, and I saw some made from wool and heavier fabrics than what they wear in East Africa. I wonder if the folks on my block in Brooklyn know about that, coz the women always looks so cold in the winter,  trying to layer up their traditional garb. They really need to check out what Morocco’s doing with their muslim-wear. Very nice.

We visited a gorgeous, gorgeous mosque by the sea, built by King Mohammed (father of the current King Mohammed. I’ve lost track of the numbers now.) They also have their version of the Malecon (refer to my Cuba posts) called the Corniche. It was a little too cold to be out there smooching when I drove by, plus I don’t think the Moroccans get down with as much PDA as the Cubans do, but the walkway was beautiful nonetheless. Some parts of the city looked very NY (okay, maybe more like downtown Philly or something) and some parts looked very L.A. (yes, really like L.A., no substitute there!)

They had the Humphrey Bogart movie Casablanca playing on the plane. I refused to watch it on principle. Not to mention, it really doesn’t have much to do with the actual city so…you know. That was my first trip to North Africa! Now I’ve been to all corners of the continent: North, South, East, West and currently headed to the centre. Yay!

PS I’ve discovered that my french skills are very “in-the-moment.” Like in-the-moment (given the right moment, of course,) I can create whole sentences and have meaningful exchanges with folks in what they seem to understand as French. So I think that will be my answer to anyone who asks whether I speak French from now on. In the moment.

PPS I thought the announcements on the NY Subway trains were bad, until I flew Royal Air Maroc! It seems that the solution for not having very strong English is to just speak super, super fast and then undulate your voice up and down  throughout the entire announcement while having your lips  totally grating the microphone like a rapper. That way we can never be sure what we’ve heard coz all phrases are killed by speed, sing-songy-ness, or the Darth Vader, heavy breathing effect. You ain’t slick Royal Air Maroc steward, I see you playa!